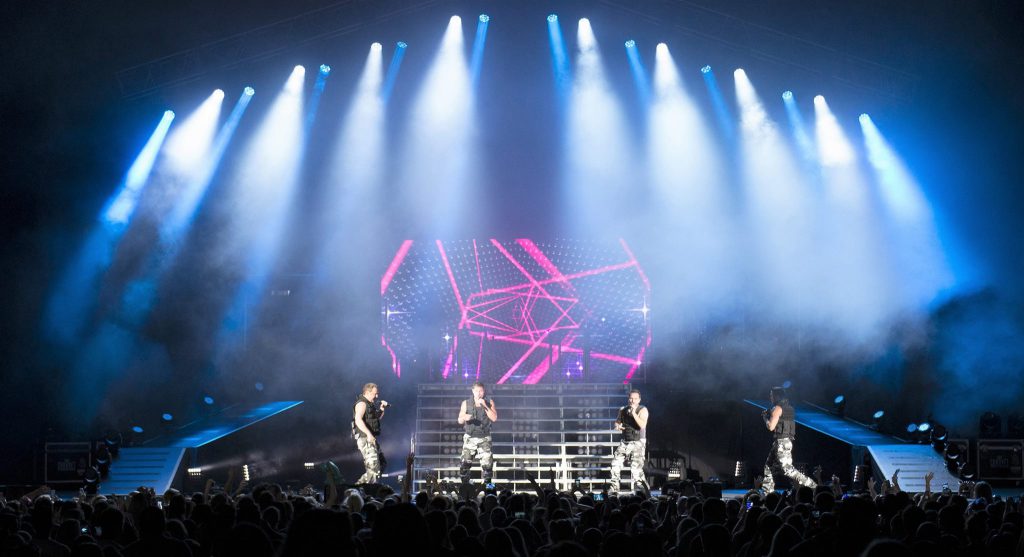 SUNRISE, FL – Legendary designer Butch Allen, who is known almost as much for his flamboyant verbal style as his killer lightshows, was characteristically unabashed when recounting the start of his work on the current 98 Degrees MY2K Tour. “This is one in a series of shows I’ve proudly designed with my friends at FACULTY Productions,” said the New York-born owner of Los Angeles-based Blame Funnel Creative. “Unfortunately, we had had very little time — I mean 48 hours — to program the entire thing. My lighting directors Andy Figueroa and Dan Norman sacrificed quite a bit to survive their first patented BUTCH ALLEN programming death march, but the end result was well worth it!”

The end result that Allen speaks off was a relentlessly intense and vividly colorful lightshow, punctuated by punchy roller-coaster ride sweeps and zooms along with some impressive atmospherics. Anchoring this immersive display was a collection of 24 CHAUVET Professional Maverick MK2 Washes supplied by RK Diversified Entertainment.

“You want to know about the look we were after?” asked Allen. “Get in the Wayback Machine! Remember the year 2000? That is our focus -big color, big beams — the whole thing.”

A key part of the powerful look Allen is creating on the tour is provided by the upstage washing delivered by the Maverick fixtures. Positioning 18 of the MK2 Washes on upstage truss, he is using them to sweep the stage with rich color washes. He is able to position the majority of the Mavericks upstage, because the fixtures’ field angle allows him to use relatively few units for his downstage apron wash.

“We have 18 Mavericks on the upstage truss and six on the downstage,” he said. “The crazy field angle of this fixture (7°-49°) made it possible for me to provide a great apron wash downstage with only a few of the Mavericks, so I could put most of my firepower upstage.”

The zoom features of the upstage Mavericks have given Allen and his team a cornucopia of cool looks to spread across the stage and in the air above. “All I can tell you is: ‘Grab the center pixel, put it in white, and play with the zoom,’” he said. “Dan Norman (the show programmer) discovered this, and WOW. It’s an entire song. It was a strong enough moment to have the producers ask to have the video wall turned off to not contaminate the moment we were creating with the Mavericks. Cool, right? Plus, the built-in macros in these fixtures are awesome.”

In addition to the Mavericks, Allen is using a collection of other Chauvet fixtures on the tour. For atmospherics, he has ten Vesuvio RGBA foggers and a collection of Amhaze II hazers. He is also “filling holes” under the set’s stair risers with eight Nexus 4×4 LED panels. CHAUVET DJ SlimPAR fixtures are mounted on truss for “some dazzling eye candy.”

Speaking of his rig, Allen quipped, “I wish we had all these choices back in the year 2000!” Still, it was the Maverick MK2 Wash that was the star of this show, according to the LD. “They are what this show is built on,” he said. “Don’t be fooled by this innocent looking little fixture. This light is truly bang for the buck. Bright as all get out, impressive zoom, fast head speed, light weight, low power consumption – our very limited fixture inventory doesn’t look limited at all. Screw limitations – this light gave us opportunity.” 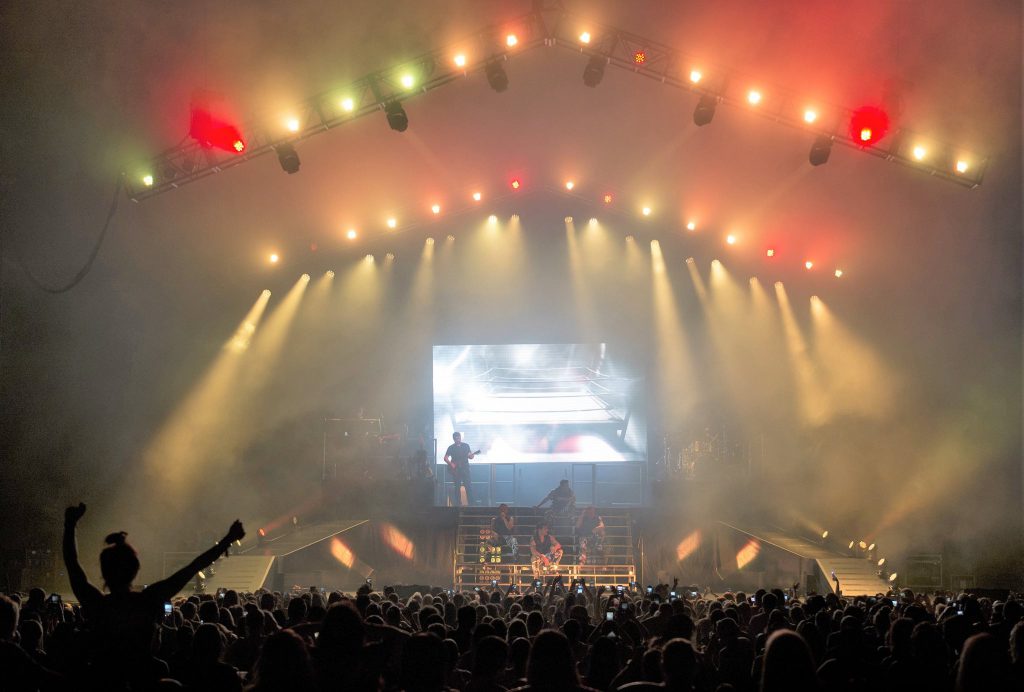